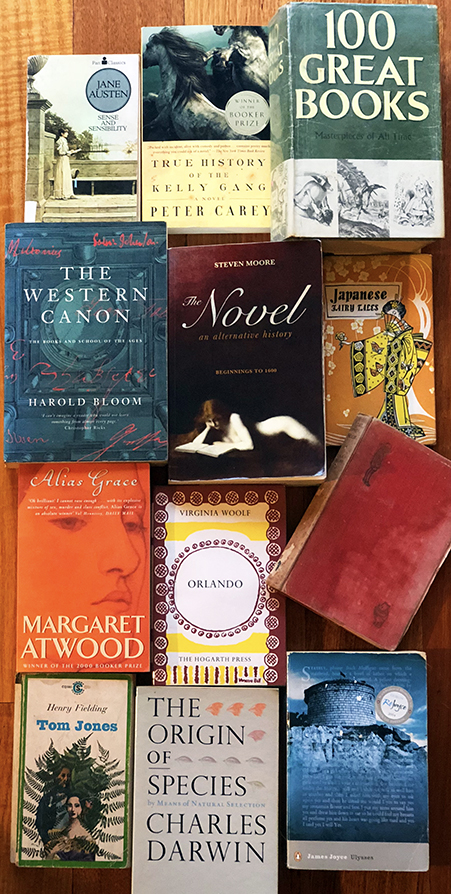 During a Sydney Writer’s Festival discussion with the writer of The Novel Cure,[1] the point was made that even keen readers in this busy world will only read a tiny fraction of the available literature — so they had better choose thoughtfully.

Someone who reads a book a week can only read 52 books a year — and wouldn’t that be a strong reading performance? I think that these days I probably average a book every two weeks, among all the newspapers, magazines, web pages, and emails. If I have forty years of reading ahead of me, that suggests I will get through about a thousand books. It’s sort of a lot, and yet, really, it’s close to nothing.

The same talk included the suggestion that 300,000 new books are published in the USA each year. The gap between what is available to read and what can actually be read in a lifetime is a yawning chasm that gapes wider every year.

At the moment, I tend to keep books I have read, thinking that I might like to read them again. Read a book again? Ye Gods! Think of a reading a book again as representing a lost opportunity to discover a new book and one might decide that there simply isn’t time. Yet re-reading books is one of the great delights, and in some cases it is the only way to really grasp a book at all. Think of Ulysses, think of War and Peace — think of any long novel you love, and you might well agree. And doesn’t the same go for serious works of non-fiction?

I should acknowledge that for many people reading isn’t about completing a reading list or ensuring that they have cultivated a certain knowingness. People who love crime fiction (or romance, or some other genre) might regret the fact that they can’t read it all, but they don’t generally worry about how many books they have read. They are reading for pleasure and as long as the pleasure continues, there’s no problem.

In fact, given the ever-widening gap between book numbers and reading capability, is it sensible in any way to worry about what to read?

Maybe it’s not, but I can’t help it. Lots of people are with me on this: look for instance at the popularity of ‘best books’ lists on the internet. The idea that there might be a ‘canon’ of brilliant work that demands to be read and which has the ability to transform your understanding might be elusive, but it is beguiling (see more on this below).

Now, fearing that this little piece may have wasted some of your precious reading time, here are my two tips on how to be “well-read”:

Lastly, I have to acknowledge how quaint it is to talk about reading books and being “well-read”. Plenty of people don’t read anything longer than a paragraph these days, and they’re not all stupid. It’s also true that you can read all day every day on the Internet without dawdling long enough to read anything long. Such people can be well-informed — I just think there’s something extra to be gained from the immersive intellectual exercise of engaging with a long text from beginning to ending.

For this piece, I considered including my own list of recommended reading, but I balked. I know what I like and I know what moved me forward, but why should that mean anything to you?

Nevertheless, here are two books about books that are interesting:

Bloom’s book is a distinguished example of the attempt to define a canonical list of great books, which are implicitly the books to read. There are many things wrong with this idea — it is a bigoted project, no matter how sensitively handled. Bloom discusses 26 authors whom he sees as “authoritative in our culture”. There is much to scream at in that single phrase alone, but of course Bloom is aware of the philosophical difficulties. The value of his work, for me anyway, is in his discussions of the issues. What makes a book valuable? What makes a culture (and who gets to own it, shape it, live in it)? What is creativity, originality, tradition, and how do these things interact? What intersection is there between aesthetics and ethics? Why do we think of some writers as great and what is it that they give us?

For what it’s worth, Bloom’s 26 writers are:

There are only four women in the list. Half the people on his list wrote in English. The most recent author on the list is Beckett, who wrote until near his death in 1989. Bloom favours individuality and independence; he opposes discussing literature through a political lens and there is a matching conservatism to his choices of great writers.

Moore’s book is an explosion of the very idea of a “literary canon”. It is common in English-speaking departments of literary studies to hear that the novel was a new form of literature invented in the eighteenth century in England. It is said to arise from the works of Daniel Defoe (Moll Flanders, Robinson Crusoe), Samuel Richardson (Pamela, Clarissa), Henry Fielding (Shamela, Joseph Andrews, Tom Jones) and a few others. There is usually a nod to antecedents such as Cervantes’ Don Quixote and Rabelais’ Gargantua and Pantagruel, but these works are seen to be not quite novels for a variety of reasons. The golden age of the novel is often said to begin with Jane Austen (Sense and Sensibility,1811) and to move on strongly from there for a century or so, before beginning to, if not exactly decline, then at least splinter and fray under the pressures of modernism and postmodernism.

Moore’s book proposes a much broader definition of the novel and gives numerous examples from cultures all over the world and dating back hundreds and even thousands of years. He discusses works from ancient Egypt, China and America. He considers works that are both shorter and much longer than our general conception of a novel, works that are concerned with (among other things) war, food, architecture, gods, magic, love, sex, and the meaning of life, works that are written roughly and others written according to rules of the highest rhetorical refinement. Because most of these works are unfamiliar to most readers, he summarises many of them, making this book the most amazing compendium of stories I have encountered. For instance, he is great at presenting the adventure stories of Arabian tradition and giving the key notes of the voluminous medievel Arthurian narratives. For me, the take-home message was that human culture is broad and diverse, that many apparent novelties may have ancient roots, and that fiction can take a thousand forms. After reading Moore’s account, the most unusual works by our modernist and postmodernist authors seem to find new roots in literary tradition and human experience.