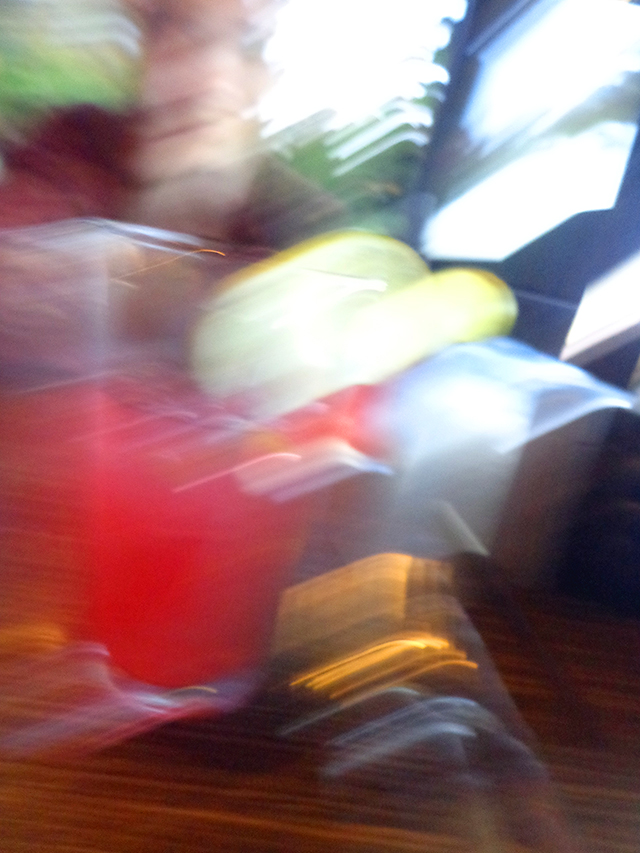 Then he thinks that the writer (he would say writer, not author, being a post postmodern kind of guy and hip to all sorts of connotations of the word author that would be detrimental to his, um,  credibility as a hip post postmodern kind of eminence grise, that last term being sanctified for continuing disbursement in the post postmodern academic trade by the francophilic tendency of good post postmodernists everywhere) will have to be careful, or else his “David Foster Wallace” simulacrum will collapse into a string of words. To be precise: will be seen to collapse into a string of words, because (naturellement) that is all that any narrative creation is in the first place, a string of words. It makes him sad to see himself this way, and, at the same time, incredibly excited — intellectually, but also/simultaneously/symbiotically erotically. Because he may have found himself encoded in the text. Or if not himself, the notion of himself. It will have to do.

1   The title of this story came to me all in one piece, one of those inspirational moments that revivify the flagging spirit of the author.* These days are not what they once were. The full story is as follows: I was reading Brief interviews with hideous men, a book which delights and appals by rapid turns, rather like (if I may be permitted a gross simile) viewing the trailer of a pornographic film, when I was suddenly inspired to write a story in the manner of Octet, itself one of the more mannered but also successful stories in BIWHM. The line ‘“David Foster Wallace” sits at his desk alone’ came to me just like that, complete, perfect and unadorned, and I thought that this was the work entire. I wrote it down. Afterthoughts began to rain like confetti. I conceived the first footnote (actually the footnote now numbered 2) and then a second and a third. I did not write them down. I held them in my head, where a veritable minestrone of creative thoughts was now bubbling away. I held them in my head like a handful of precious jewels, while I found myself, willy-nilly, writing the second sentence of the story. Whence had it come? Who can decipher the miracle of inspiration? Not I — I had no time. It occurred to me then that the rapidly expanding corpus of the text required a title, and without further reflection I felt sure that this was it.†

* I say ‘author’, not writer, not wishing to imply that I am not a post postmodern kind of guy and unhip to all sorts of connotations of the word author, but acknowledging (a) that I am no kind of eminence grise, hip post postmodern or otherwise; (b) I have no credibility to lose; and (c) that the word ‘author’ conjoined with ‘I’ contributes most effectively to the illusion that ‘I’ am a ‘person’ (cf, the story, paragraph 2, and footnote 2).

†  Later, I removed the quotation marks from ‘David Foster Wallace’, feeling that, although these were essential to the meaning of the first sentence as sentence, they were inimical to the spirit of the title as title, regardless of any fine imprecision of meaning thereby engendered (see note 2).

2   The quotation marks around the name, “David Foster Wallace”, hardly need explanation to the discerning, but for legal reasons and for the uninitiated: they signify that the name is a fictive reference; they are possibly ironic, in some unstable and polyvalent manner, but it is not to be thought that the David Foster Wallace of this story is David Foster Wallace, author of BIWHM and other well-known works.

4 Foster: An intermediate name in the form of a transitive verb is always worth noting, even if there is nothing to say about it, which is not the case in this case. The case in this case is imperative. ‘David’ is enjoined to foster ‘Wallace’. While unable to avoid chasing this particular rabbit down this particular hole, it seems, upon reflection, of nugatory value. I should edit it out, but what then?

5   Wallace: a surname with a noble history (eg, William Wallace), a first name with an ignoble tinge (eg, Wallace Simpson, Wallace and Grommit). By any account, a bit of a come-down from David, and so I ask: why should David foster Wallace? A: It is the duty of the strong to foster the weak. We have already mentioned, in passing, an American teacher of writing, himself a writer of preternatural talent, who spent (some of) his days fostering the creative talent of less-gifted, or less-focused, writers. His name, too, was David Foster Wallace (DFW).

6  David Foster Wallace: it only remains to be said that the ringing rhythm of this trochaic trimeter seems ideally designed for naming an author, if by author in this instance we mean the brand used by a publisher to promote the sale of a certain collection of books (cf, the story, paragraph 2, and footnote 1[*]).

7   Writers sit — it is what they do, before they write, during the act of writing, and very often after writing too. They are sitting ducks.

8   There is no doubt — is there? — that the masculine pronoun is appropriate here. By which I mean to question whether the whole post postmodernist question as posed by writing like this, or writing like that of the DFW referenced in this, has to be seen as a kind of masculine game, women having better things to write about and different ways of writing. Although, having said that, it also has to be said that defining anything as masculine or feminine risks being discriminatory, prejudicial and just plain wrong.

10 Alone. There was once an American writer (DFW) of preternatural talent who worked obsessively (read the books: you will agree that something like obsessive­–compulsive disorder must have driven the writer who wrote them) to write books that both played the game of words and yet also reached hard for the hearts of putative readers, as if it were possible to speak directly to them, whoever they were, despite having put every intellectual obstacle in the way of so doing, such as by shifting the frame of reference, using sesquipedalian words, layering subordinate clauses in interminable sentences, and messing with linear narrative to indicate something of the chaotic indecisiveness of human understanding. The first outcome of DFW’s obsessive efforts to reach out — or if not the first, most certainly one of the first — was that he spent oodles of time at his desk, alone, moving further from the people around him while he crafted fiendishly clever narratives that might have, ultimately, if effective, the effect of bringing him closer. The final outcome is an open question. DFW committed suicide in September, 2008, unable to continue. He left unfinished and chaotic his last novel, The Pale King, which includes the following passage describing the work of ‘The substitute Jesuit’ (a tax officer):

He paused again and smiled in a way that was not one bit self mocking. ‘True heroism is you, alone, in a designated work space. True heroism is minutes, hours, weeks, year upon year of the quiet, precise, judicious exercise of probity and care — with no one there to see or cheer.  Just you and the job, at your desk. You and the return, you and the cash-flow data, you and the inventory protocol, you and the depreciation schedules, you and the numbers.’

Death of a Bannister