Alison was peeling potatoes by the kitchen window. Marcia asked her how she was going.

She meant without Simon. Although this thought came to Alison at once, it didn’t hurt. She realised that she hadn’t been thinking about Simon, that in fact she hadn’t thought about Simon for a long while. She even felt that Marcia was a bit behind the times asking the question, as if she was trying to drag her back. Alison felt a slight disdain, as if Marcia too was something she should have left behind.

“School’s great,” Alison said. “The seniors are on stu-vac, so my load’s way down.”

Alison gave the potatoes her full attention. They glowed creamy yellow in the afternoon sunshine. Before she peeled them, they had little scars and blemishes like tiny moons. Afterwards, they were anonymous as her thoughts. 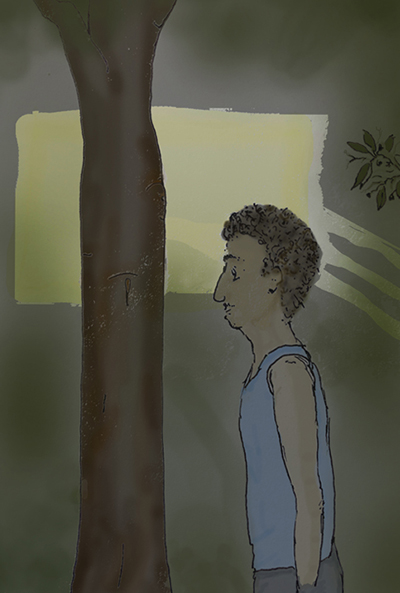 Duane stood outside in the rain, watching several of his friends chatting and eating in the kitchen. It was dark, and although a golden light streamed from the window onto the lawn, Duane was hidden in the foliage of a garden bed, wrapped in shadow. He was communing with a tree. Its wet trunk was inches from his nose. They had not met before, but Duane felt an intimate connection with this tree. Its patience was of his colour.

Duane could have gone inside at any moment to join his friends. He found this thought comforting, but felt no urge to break his solitude. The rain fell heavily. He was completely wet, but not cold. His bare feet sank into the earth.

His friends were laughing happily. Duane could hear that, and imagine why, but not make out the words. Their voices murmured through the glass like the hum of bees in a hive. They did not miss him. They did not know he was there.

After an hour Duane realised that it was best if he went home without disturbing them. As he went across the creek, summer lightning sparked on the purple horizon. The thunder followed slowly, soft and without threat.

During the tequila season Nik would come downstairs of a morning to find the living room littered with empty glasses and twists of sucked lemon. Everything would be dusted with salt. It was common to find a body or two slumped in chairs or across a rug.

One morning Frank was lying on the couch. His head was slumped back, stretching out the leathery skin of his neck so that the creases showed as white lines. In front of him was a small brick of fifty dollar notes, folded and wrapped in rubber bands.

Nik watched until he was sure that Frank was completely unconscious. Then he picked up the money, trying to calculate how many thousands of dollars were in now in his hands. His heart went bang. He was grabbed by the thought that if he was prepared to shoot through and never return, he could leave at once.

Would anyone miss him? His mother, of course. Not Frank. But the real question was whether he dared to strike out on his own. It did not take long for Nik to decide that he was not brave or foolhardy enough to find out.

Next he imagined what would happen if he stole the money and hid it away for the future. Frank would wake and notice fairly quickly that it was gone, but he would have no idea where. It was amusing to imagine Frank patting his pockets, searching, and trying to retrace the steps of his descent into night. But Nik knew that at some point Frank would question him. He did not trust his face to hide such an enormous secret.

Nik put the money down. Instantly he picked it back up. He could not take it; he could not leave it. He looked again at Frank, who lay as if dead. He took the money to his room. Unwrapping the notes, he removed a single fifty from the middle. Nik figured that even if this was detectable, it was too trivial to have consequences. He wrapped the notes again in their rubber bands and put the bundle back in front of Frank.

Nik went out with his stolen fifty. When he returned, the money and Frank were gone. Nothing was ever said, but as the weeks went by, Nik felt worse and worse. Why had he taken anything, if he was not brave enough to take it all?

Digging in the garden

Digging in the garden, Simon was content. He told himself he was content, unlike those people who could not keep their hands off their phones, as if they hoped suddenly to discover that their lives were more interesting than they had realised.

It was his intention to break up the hard soil beneath the ironbark, to dig down to perhaps thirty centimetres and along for a metre or so, then to mix fertiliser and mulch in with the soil and plant some ferns. He had bought the ferns and fertiliser a week ago. It could not be left any longer. He would wet the hole thoroughly before filling or planting. This would all turn out well.

While he was digging, he thought of his friend Ian, who never dug holes. Ian had once scoffed at Simon’s suggestion that the gardenia on Ian’s balcony needed care and attention. He implied that turning over the soil was beneath him. A gardener would do that. Thinking about it now, Simon saw it as emblematic of Ian’s inauthenticity. As if Ian’s father, a kind enough old man, was a lesser being for enjoying his garden. The last time Simon had seen Ian’s father he had damp circles on his knees, fresh from weeding, and, yes, Ian had cut off their conversation, taking Simon straight down to the boatshed as if the old man was of no account.

As he dug, Simon wondered why he called Ian a friend. The man had too much money. He was brutal, always on his phone bullying someone. Seeking a better table, a lower price, an earlier flight, some advantage extorted from the wageslave unlucky enough to have fielded his call.

The trench was intersected by a root of the ironbark. Not able to dig down there, Simon probed further along, leaving a gap.

If not for Lucy, Simon would have dropped Ian long ago. How Lucy put up with Ian, Simon could not say. Why Lucy married Ian, he did not like to speculate. It was all long ago now.

Satisfied with the depth of his hole, Simon went to the next stage, watering, then mixing and filling. It was all taking too long now; he wanted a result. He knocked the ferns out of their pots and nestled them into the freshly enriched soil. Their delicate green tops looked sparse, even feeble. Ian would scoff, but Lucy would smile if she saw them. He imagined that the ferns had grown. He imagined Lucy’s smile. 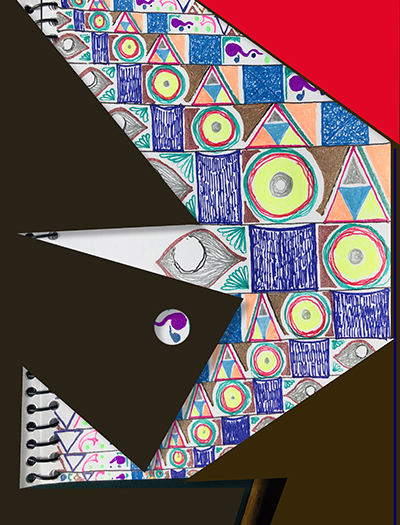 Let’s imagine — I don’t know — let’s imagine that we are constructing a story together, even though we are far apart. Where do you want to begin?

I don’t know. Let’s imagine you are interested in the idea of a princess with a radish for a head. Sure, okay, let’s go with that. It’s not where I would have — no, no, it’s fine. That’s the point. We could —

… construct some sort of randomising element to take us forward. A man made out of chairs. Seven mistaken children. A lingering mustard sauce. The energy derived from awkwardness. As the sun dawned on Saturn. The intersection of two sad misunderstandings. Now roll the dice, so to speak. Then toss a coin to decide whether to accept the suggestions of chance. Or not, as you see fit. Then I will write down what comes to mind.

All the elephants in the room have come home to roost.

I belong to a small writers group. One of the things we do for fun is write ‘microfictions’ based on a prompt provided by one member, which we then bring along to our meetings to read to each other. None of the stories above is titled according to the prompt-word, which I can’t always remember now — the connection was always tangential. One story was not prompted by a prompt-word, but just by the exercise of re-reading these stories.

It is surprising what a spontaneous writing exercise can shake loose.